Is Brooks Koepka actually a better golfer in majors?

Thread title says it all. While the data behind this is basically undeniable at this point (see below), a part of me still says it doesn’t make sense. It’s one of those situations where your prior belief is so strong that it takes an enormous amount of evidence to move you off of it.

We would expect Koepka to be better in majors just based off of his fit for major vs. regular tour stop courses, but realistically that can only account for 0.3-0.4 strokes at most. The main reason I’m skeptical is that everything I know from my experience being around the game for 20 odd years tells me that you can’t decide when you play well (by “trying harder”, for example). Golf is a fickle game… and yet Koepka elevates his game at majors time and time again, with relatively few exceptions. Maybe it’s a bit of a self-fulfilling prophecy at this point: Koepka has convinced himself he only plays well in majors, which makes his self-belief higher at majors, which makes him play well, and so on. 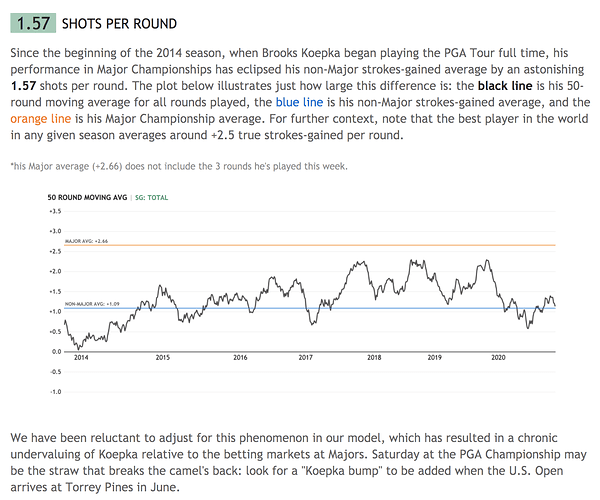 Are there any other players that have regularly outperformed or underperformed at majors over the past 5 years? IE who else may be getting a “major adjustment” in the model for Torrey?

Pretty amazing numbers. The eye test knew he was better in majors but more than a stroke and a half PER ROUND if insane.

I imagine if you are going to bump Koepka up because of his historical performance in majors, you’ll bump others down (ie Sergio)?

I don’t really think it’s possible to just play better in majors. However I do think it is possible to play worse in non- majors. Koepka has hinted, of flat out stated numerous times that he doesn’t care, doesn’t try, doesn’t practice for non majors. I always took this as a bit of disrespect to his fellow tour pros in that those events were beneath him. If you look at Waste Management this year, where Brooks won, you had a different animal, he was wounded and by his own admission had developed some self doubt. Clearly he is a player with great potential, but Ion my opinion, a player who only pushes to that potential when it suits him. Not very professional it would seem.

I think of Brooks’ quote as part of kayfabe. He has his gimmick and he says what is consistent with the gimmick.

In reality he works as hard as his body allows, like most other PGA Tour golfers.

I think this is a bit harsh on Brooks @Robie.

Like us, he too has probably questioned why his performances are so much better in majors. Perhaps the most convenient answer from his perspective is that he’s just not as motivated for regular events (which would be true of all the top guys).

This quote from Brooks has always stuck with me… he said it the Tuesday prior to winning the '19 PGA at Bethpage.

“I think sometimes the majors are the easiest ones to win ,” Koepka said. “Half the people shoot themselves out of it, and mentally I know I can beat most of them, and then from there it’s those guys left, who’s going to play good and who can win?”

He clearly has an immense sense of belief during majors that he will simply outlast the majority of the field. This feeling/confidence would understandably wither at most regular tour stops where it is more of a shootout and he can’t rely on guys falling away as he patiently plods along. I highly doubt that Rory feels the same.

Maybe it’s a combination of course fit and always bringing his A game to majors. Or put another way most other (even elite) players have some nerves at majors and Brooks just doesn’t.

All golfers (not just Brooks) try to be in peak performance for majors, obviously Brooks has been more successful than others.

It seems like there are some other good ball-strikers that overperform in majors as well…Louis Oosthuizen and Branden Grace come to mind. Any numbers on these two or perhaps others?

Angel Cabrera also comes to mind, he had 6 top 10’s in majors before his two major victories. Aside from his victories he also had two near-misses, the 1999 Open Championship and the 2013 Masters.

Also Rory McIlroy seems to get a lot of flak but the numbers say that he’s the best player of the current generation. He has 4 wins, 22 Top 10’s, and has a 7 year string of having at least 2 Top 10’s in majors. Yes, he Jon Rahm’d a few of those but it’s still pretty impressive.

It could be interesting to note that, from a mechanics perspective, Brooks has a golf swing that is objectively a “high-maintenance move” and he really could benefit from bearing down and getting it really dialed in, spending some extra time and extra reps in an “important” week and/or not spending the time and reps and having a lot more loose swings in a “regular” week. Obviously this could be said for any golfer with any swing but it makes sense that Koepka’s performance would vary more than, say, Rory McIlroy’s performance, based on the mechanical differences in their swing.