Is the model off on Kisner?

Dude is playing great and I’m losing bets fading him. Normally I would say small sample size, but several bettors and DFS players have been high on Kisner in the last couple tournaments (and hitting). Should we be ignoring the recommendations to fade Kisner?

I remember losing a bunch of bets last year on Jordan Spieth too before Datagolf model finally caught up.

Personally just think there are various players that you need to be cautious fading rather than blindly following Datagolf model. Kisner has a high floor and low ceiling. When Driving Accuracy counts more than Distance then he has the ability to turn his form round dramatically. People were on him because the courses the last 2 weeks are where he can perform.

Nothing fundamentally wrong with the Datagolf model it can only use the stats available.

Thanks for chiming in, any chance you could point out some of these players before the tournament begins? (Hopefully before I lose money, LOL)

Haotong Li was potentially another one last week even though he didn’t play great in the final round.

I’m not endorsing @Smarty’s theory necessarily, but I do think there are guys the model just doesn’t handle that well. One recurring theme is players who have a stretch of terrible play 2-6 months ago but then play really well for a week or two. Our model potentially struggles predicting after that week or two of good play. Leishman last year fit this mold, and Kisner/Li fit it last week. When you combine these hunches with our fair odds being consistently way off market on these guys, it is best to proceed with caution.

That being said, at least for predictions in R2-R4, our model now updates pretty aggressively on guys who are playing well that week (especially if it’s through ball-striking). We updated Li’s skill a ton throughout the tournament last week (his baseline was very low to begin with), but still we were pretty far off-market on him in R3/R4.

To be fair Kisner probably rated as a Fade for Sentry Tournament of Champions based on evidence available.

Always worth a look at Player profiles on site and taking a look at recent seasons and performance.

Kisner
just seems to be one of those golfers who can deliver top performances after a cold spell and can run hot for a few weeks in a row.

Matt do you have a variance attribute that you could surface that might be able to flag some of these players (along with recent form which helps later in the season)?

For the most part Data Golf projections are accurate and I’ve made money following them.

However by knowing which projections to pass on I think I can make more money.

We should get a list going so we know which wagers to pass on. It could save everyone some money!

Certainly agree that on Projection’s these look that way.

BUT using Matthew Wolff as an example not sure I personally would class him as a fade.

His performance in the last 3 months (Taken from True SG query Tool) has him as a Top 10 player (Elite Level) and recent results back that up. When he hit the PGA tour he was good and showed his potential, then experienced Mental Health Issues problems which was effected his golf related to isolation and loneliness of a single man on tour.

My understanding is that DG take a longer term view to generate the projections. 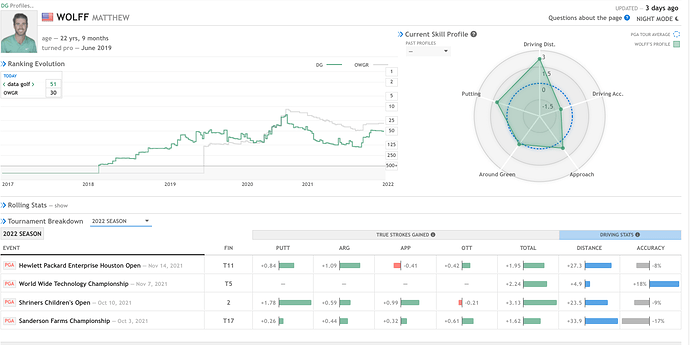 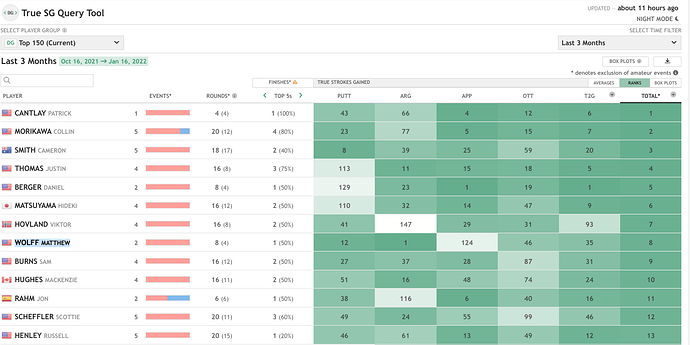 Just a game of opinions which makes Golf so much fun!

Just got to go with what works for you and hope the Golf Betting Gods are on your side!

My point was that you might lose money betting against Wolff in matchups.
Reed and Arnaus have shown life as of late too, let’s see if they can continue the turnaround

Not a good day for this strategy today

And I am very thankful! Go Data Golf go

I am a bit late to this discussion, but wanted to give another perspective on why Kisner may be systematically overvalued in betting markets (and not under-valued by DataGolf). While it may be that Kisner is hot-and-cold, or thrives on certain setups or grasses (bermuda), the fact of the matter remains that he is just not a high quality player from tee to green (relative to the top 50 players in the world). On most setups, this puts him at a substantial disadvantage against whoever he is squaring off with in a matchup.

So why do the books disagree with DataGolf? My hypothesis is that the books agree with DataGolf, but their clients do not. I think that books experience a lot of one-way retail flow on Kisner (and perhaps some other players like Max Homa) due to his likeability, how candid he is with the press, and his following amongst barstool sports fans.

People just want to bet on Kisner-- regardless of the price-- so the lines are a bit dislodged from where they should be. Of course, with enough sharp money, the lines should be fair, but most online sportsbooks in the US do not permit sharp money to hang around for very long.

I lost many bets fading Kisner

It’s not just the (fairly frequent) Top 10’s. It’s the Top 40’s where I’m losing out because he’s winning his matchups and 3-balls

He’s been playing better this season

I am trying to offer an economic explanation for what appears to be a consistent disagreement between DataGolf and sportsbooks when it comes to Kevin Kisner.

Whether you decide to trust DG or the books on Kisner going forward is up to you, but I know where my money is going.

I haven’t looked at the numbers that closely, but when rolling it well I’m certain he’s one of the best putters on tour. He’s consistently pouring in putts at a much greater frequency from ALL distances than virtually every other player in the field, especially when he’s Top 10/5ing it. Also, he excels on Bermuda grass of all variations, which was the grass type in most, if not all of those tournaments. When he is putting standard deviations above the field he can get some results and make up for his inferior ball striking. just my .02$