On the player decompositions for the other majors there is a major adjustment but doesn’t appear to be there for this event? Any reason or just that there isn’t room now there’s a link adjustment in there?

The Links adjustment has performance in past Open Championships baked into it, but we are not making adjustments for performance in other majors as it doesn’t seem to have as much predictive power here.

So, we gonna use this thread for genereal The Open discussions? Or no?

I was well happy to see that a lot of the +EV golfers weren’t American in the place markets.
Was dreading a repeat of last year where the highest 17 EV golfers were 16 Americans and Corey Cooners.

Leaving the outright bets as late as possible to account for weather bias.

Nah man, can’t leave the biggest EV ones out because of that. Plenty of room to take a chance with the weather.

Yes, made a big effort this year to properly adjust for Links experience / nationality effects. Blog post dropping tomorrow on the subject if anyone likes to read those.

Sure. I renamed it.

Seems like there are some big numbers available at most books. I guess for the weather bias, you should just lean towards Longshots if that’s something you are worried about – variance helps them!

I’m happy to take them for the top 20 market, but actually winning a major is an incredible mental ordeal for those who haven’t contended in big tournaments. We haven’t had one of those since Keegan Bradley in 2011.

DG will undervalue the top of the market and over-emphasise the long shots in these events. It’s a lot more exciting to see someone at 250/1 with DG giving fair odds of 130 in a shitty event like the Barbasol than it is in the Open.

Here are the major winners since 2000. Wish I had their starting odds alongside, but there are certainly a few reasonably long-odds winners since 2010, but I don’t know if any would have been over 100. Maybe Jimmy Walker? One issue with looking back on these is that now that we know these guys actually got over the hump and won a major, we look at them differently! I think that’s true for me for guys like Willet, Woodland, Walker, Dufner.

Edit: just looked up Walker and I forgot how much he won before winning the PGA. So maybe he’s a bad example. 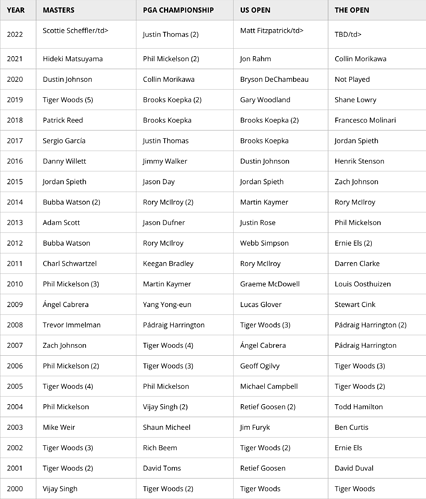 I mean, Phil was a big price and probably more unlikely to win than his price suggested. Willett shortened in the run up but still had to have been 80/1+. Same goes for Woodland, he was definitely 150/1 antepost.

My instinct is that Burmester/Arnaus/Wyndham Clark are less likely to win than the model is suggesting. But I also think the market is absolutely pricing in the ‘only these guys can win majors’ narrative. Feels like a matter of time before someone like Mito doesn’t shite it on 18.

A couple of guys the model almost likes (if you have Exchange access) and would fit in the ‘can win’ narrative category are Lowry and DJ.

I’ve obvs eschewed them to lump half my roll on Jordan Smith and Ryan Fox. See you all Sunday!

Totally forgot about Phil! Also, yes, Mito… should have won.

How come you are so big on Jordan Smith and Ryan Fox?

I’m of course joking about the size of the bet! Normal bets on both, please gamble responsibly etc.

Mostly cos the DG model says so but things that might be outside the model: both Euro Tour guys, Smith performing quite well at Renaissance (gives him confidence? Likes these conditions being warm ((by Scottish standards)) but gusty?). Both have probably burned people by ‘bottling’ some recent chances and so people are overweighting the luck involved in that, idk. Nonsense that probably doesn’t matter or is already factored in but can convince you.

Re the Euro tour intuition: this is our most recent data viz: Viz Blog | Performance Map. No surprise that the European Tour guys (especially Englishmen!) play well at the Open.

That is an awesome viz. Wait until Meronk ships and Poland goes bright green

I remember hearing that since Bradley in 2011, Phil is the only golfer to have won a major and not been ranked inside the top 50 at the time.

Willett was ranked 12 when he won the Masters, Dufner and Woodland were 21 and 24 respectively, and Walker was 48 (but as you mentioned someone who had won quite a bit).

I don’t even think it’s fair to compare Phil to other 150/1 shots, because we know that if a serial winner who is badly out-of-form starts playing well enough to get into contention he’s going to have a massive mental edge on other players who are similarly priced.

Inevitably we’re going to get a journeyman/novice winning at some point, but it’s amazing that it hasn’t happened in over a decade, particularly when you compare it to 2000-2011.

That’s just in the past 10 years

Yeah they were good players and won some decent tournaments but I don’t remember them being in the mix on the back 9 on Sunday in a major, the Players, or a WGC prior to their first major victories

Seriously? Fitzpatrick literally contended at the major before he won, Morikawa was world number 12 as was Willett, Woodland was 24 and was bang in form, Simpson was 13 (having been as high as 6 that year), Kaymer’s first win was in 2010 as world number 13, and then that leaves serial tour winner Walker.

Can you see the difference between that lot when they won, and the likes of Burmester and Mansell at the top of the EV table? As I look right now, the top 15 EV golfers (everyone above Sung Jae Im) would be comfortably the “worst” player CV-wise to win a major since Keegan Bradley.