Theres a fascinating (IMO) discussion happening on twitter/bet the process podcast involving Rufus and the idea of hedging with -EV bets. Cliffs: Rufus had a 300-1 on Mito to win 150k, he posted to twitter and many people responded with “why didnt you hedge?!”. Rufus’s stance he wouldn’t hedge a bet just simply to hedge when its -EV. But then he built a hedge calculator on unabated that using Kelly criterion proves that you should take -EV bets when the bet you are hedging against will win a large enough % of your bankroll. Has anyone ran into this situation? 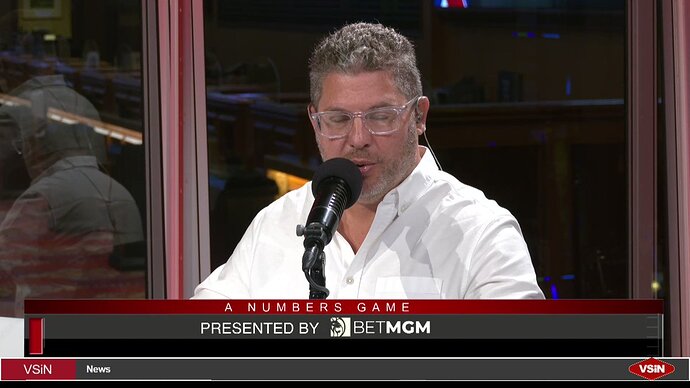 In that case you’re just trying to build a portfolio and you’re buying and selling positions as quickly as you can. 2000 bets later you end up +1K for the week

The big thing here is that he made too big a bet on Pereira. The better decision would have been to bet like $5 on Pereira to win and bet a lot more on him on the T5/T10/T20/T30/T40/Cut markets.

Well, that’s just his point. Being very conservative about +EV bets he could in theory only have an outright bet just for the simple reason that he only found value meeting his threshold standards on an outright win… (or do you think outright/T5/T10 always correlates in a mather that you always can spread your risk this way? Sincere quiestion.)
Therefore he should not have bet more, or even anything on place just for the sake of it. So it’s basically the same discussion in a different shape.

Anyway, he probably did have money on place, but they didn’t discuss it (only saw the 9 minutes on twitter)

edit: Watched the whole segment and he only had “some each ways on euro books, but that’s pennys compared…”. So no specific place bets.

Yeah so it’s harder than it sounds to get good bets in-tournament, the juice just gets higher and higher the deeper you get into the tournament

Hedging is impossible in golf unless you have Betfair

Rufus may or may not be a professional gambler but he surely messed up there. Would’ve been a sweet victory though

I had 210-1 at FanDue book @ MDlive Casino. He mentioned he got it at circa early.

DataGolf often shows good value on longshots to win but no value on them to top5/10/20 ( I have a feeling his #s arent that much different than DGs). Rufus is bankrolled enough not to have top take a -ev Top 5 just for sanity purpoes.

He clarified he didn’t have access to an exchange. I was confused by his 300/1 number because the slip showed Friday, which would lead on to assume he got it after the start? I did have mito 200/1 pre tournament from MGM and that was the best I saw.

You think a guy with (what I presume from his pod) is a 7-figure bankroll should be betting $5 on outrights?

He has mentioned many times $25k on matchups as a seemingly regular bet. Assuming that’s a unit, $500 on an outright would be 1/10th of a unit.

Hes using kelly criterion, so hes not betting in “units” as much as % of bankroll with respect to edge and odds. If he bets $25k on a matchup that’s probably the max bet at the sportsbook as Rufus probably has a 7 figure bankroll and kelly probabily would ideally have him bet >$25k

This thread kinda went off the rails, if nobody saw Mito at 300-1 anywhere thats most likely due to 2 reasons: Rufus moved the market lower to 300-1 from his bet or he bet it much earlier than the week of. Anyways I created this thread as a discussion of hedging and was asking the question if anyone who most only takes +EV bets has made knowingly -EV hedges because they would make “too much” if a bet wins. Ive run into this situation a few times where (using kelly to determine bet size) the edge is so large that I had a bet that will win 1.5x my bankroll. I wish I could have hedged but because it was a top5 and idk how to bet player will not top 5.

The better question is how he avoids getting limited. I get limited much more quickly

Understood. I didn’t realize he used Kelly exclusively and mainly I wanted to point out that a $500 outright was not insane as others had implied considering his normal bet size on a matchup.

It’s safe to assume his bankroll is a good bit more than $1mil.

Most guys in his spot have a team with multiple accounts across multiple books, and there are other strategies for getting down more. As well as some books that won’t limit like Circa and offshore. Suffice to say he’s not getting down substantial amounts on Bovada, FanDuel, MGM, etc

I don’t quite understand this.

@DanielSong39 with a 1 mil bankroll, 300-1 and a true odds of 0.5% your bet should be ~$1683. The 0.5% true odds is arbitrary I just included it to show that even a relatively small edge (0.5% vs 0.333%) one should have “large” bets when ones bankroll gets up that high. Saying you would never bet more than $50 is obviously your choice but that’s not the way to optimize bankroll growth.

I just explained in my previous post, the biggest question is the true odds. I find that these longshots don’t hit as s often as the model odds imply