Scott Jamieson in the lead - a story on it's own

This regarding his lead after two rounds. I’m well aware of the difference in entering round 3 vs round 4 but I feel I can precede the situation for the sake of discussion.

Scott Jamieson, well ahead after 2 rounds, known to be a bit of a choker so I checked out the pressure tool, and sure enough. That’s not an uplifting read if you’re a fan of Jamieson, starting round 4 with a lead, or within. If this post: Pressure and Performance would regard DPWT (EUR) he would place really well. Well, bad. depending on how you see it…

He’s -1.88 worse entering 4th round in lead vs expected (5th worse on the blog post PGA-list). But on the other hand, if you sort after entering as 2nd to 10th, there’s nothing really conspicuous about it. But again, when looking at seperate performances well under expected you find some really bad ones. F.e going from 1st to 21, 9 to 32, 9 to 33. With between 6.4 to 7.74 SG worse than expected.

All in all the data could be considered too small, I feel that the tendency definetely is there.

However, what made me curious. He’s still valued higher than the bookies have him as per now. Given 30% on the live model where as you could get +300 from some bookies.
I understand that the pressure factor is just one small bit of everything in a model, and that he actually performance neutral on round 3 entering in good position. However, since there’s plenty of scenarios where he leads after saturday as well, his assumed (dis)ability to underperform on sundays should bate his winning chances a bit already, sort of implied? Therefor it seems high.

All in all this could be almost a non factor that really doesn’t, and rightfully shouldn’t be valued more important than just a fragment of the total. How important it should be considered I personally can’t determine. But I felt I wanted throw some thoughts out there either way.

Interesting post, might reply with more thoughts later. Just a couple notes on the model: you are correct that because Jamieson will be leading in a lot of scenarios entering round 4 (i.e. in a lot of simulations) he will be receiving a negative adjustment to his skill for round 4 in a lot of simulations. So even though we aren’t in R4 yet, the pressure adjustments for R4 are still applied in the simulations and therefore do affect our current predictions. Also, I should add that we do make pressure adjustments for R3 (they are slightly smaller than those for R4).

Regarding the bookmakers’ odds versus our odds, I noticed that at the RBC Heritage we were in line with the books on Cantlay when he was leading. I’ve also noticed this in a couple other cases. I need to do a more thorough look into this, but it does seem like we show value on leaders whenever they are “unproven” guys but not when they are top players. In the work I’ve done looking at pressure I was never able to find a reliable predictor of who plays well with the lead, so therefore we don’t treat specific players differently when they are leading – they all receive the same (negative) adjustment to their skill. Perhaps this is not correct, it’s something I’m going to revisit, but I do think that’s the source of the discrepancy with the market.

Ah of course, when you put it like that with simulations instead of scenarios it’s pretty obvious that the pressure factor will play out.

Ah, interesting, because I noticed that Van Rooyen showed value when he was in the lead at the RBC Heritage. Even though it was a shorter period of time(s) it was clearly so vs several books.

I see. I think it sounds correct too apply a general (negative) adjustment on the leader if you can’t find a realible and more sophisticated approach that works. But if that were to be found, it would obviously be something good becuase players apparently reacts differently to pressure.

But of course it’s self explanatory that it’s easier to collect data from a field perspective when you have someone entering the 4th round in the lead every single week, where as most of the individual players will rarely be in that situation. But since you talked about top players vs unproven guys maybe that’s the way to approach it? Comparing groups in general, and going by ranks. Just to dissect it a bit but still have some basis to work with.

The more I think about it the more I understand how this modeling stuff must be hard. I leave it here for now

By the way. I notice that Scott Jamiesons lone win in 2012 is NOT registered on DG https://datagolf.com/player-profiles?dg_id=11397

Maybe it’s because it was some weird 36 holer on a “modified” par-65-course?
http://www.owgr.com/en/Events/EventResult.aspx?eventid=5149 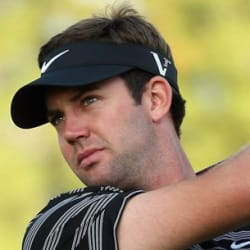 Scott Jamieson’s impressive victory at the inaugural Nelson Mandela Championship presented by ISPS Handa in Durban not only marked his maiden European Tour title but also saw the Scotsman take an early lead at the top of the embryonic 2013 Race to...

And of course Jamieson came from behind with a solid 57

Hm, good find. Will look into that, no reason it shouldn’t be on there.

I’ve burned money on a number of unheralded 18-hole and sometimes 36-hole leaders who crashed out of the top 20, I think the books are onto something

Re Van Rooyen, that fits with our theory right? He is not a proven player, and we showed value on him.

Also, another rough week for Jamieson. Hopefully you trusted your intuition and not our model last week.

As a counter example to keep us honest here, many books had JJ Spaun seriously underpriced to win after 18 holes, and he won. The nature of these bets is that most of them lose. The idea is just to lose a tiny bit less often than the books think you should.

I do not have much time at the moment to clearly formulate this thought, but in general I would be against a move to directly incorporate more of a penalty for “unproven” players directly in the prediction/ simulation.

I think more helpful would be to have some mechanism that flags + EV to-win bets that DG is suspicious of.

For what it is worth I think Van Rooyen totally could have won at Harbour Town.

Yup, Van Rooyen is good but defienetly not proven yet, so I agree on that.
I’m sure it is, and I’m sure you’ll get at it when you can! I’ve only been here a few months but it’s pretty easy to understand that you guys put in alot of hours and thought process into this. I like the model and site alot.

I have looked at whether certain characteristics predict performance in / around the lead (such as whether you are an ‘elite’ player) and have not found anything. But, it wasn’t the most rigorous analysis so it’s probably worth revisiting.

I am fairly content to keep firing at unproven leaders because 1) the data seems to support this, and 2) even if there is some effect, this is such a common narrative from pundits that it wouldn’t be surprising for books to over-adjust on it.

Yup, true about the narrative. I see it all the time in the sports I’ve been betting full time on for years. Bookies doesn’t necessary have to be correct odds wise, just correctly expose the betting masses and make money.

Btw, I did put in a few bucks on Jamieson because the difference was just too big too ignore. And in such a low odds interval. I mean in theory it was plenty of room for both bookies and the DG model to be off (not saying it actually is, my words are just observations) and still find value on 4x (euro) when 30% on DG model. The model seems too sophisticated and proven good to not take a stab at odds like that even if you hold back a bit.

Good point and I cashed in on Varner III in the Saudi International as well.

Also Ewan Ferguson won shortly after a massive choke in the final round. So I guess it only takes one hit for the narrative to unravel

Yeah, my personal calculations had him at 30%

It’s an easy course so Rahm will have to shoot -15 in the next 3 rounds to win, even for him it’s not a given

Yup, and Bekker showed some value on DPWT all the way when in the lead.